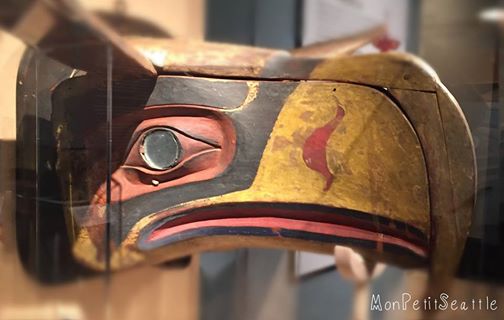 The native mask carved in the late 19th on Vancouver Island that inspired the original Seattle Seahawks logo is now on exhibit in Seattle.
In 1975 the NFL commissioned a logo for the newly formed Seattle Seahawks team. The designers were inspired by the northwest art and especially by this transformation mask depicting an eagle.

If you want to see the mask, learn more about it and the ceremony during which it was worn, go to the Burke Museum. The mask is part of the current exhibit: “Here and Now – Native Artists Inspired”.

I’ll write more about the exhibit in the following days.
In the mean time… #GoHawks!