Image
After the stunning “Seeing Nature” exhibit at the Seattle Art Museum, here is another occasion to see more of the fantastic art from Paul Allen’s collection.
This time, the exhibit is composed of abstract art by some masters.
“Color and Pattern,” at the Pivot Art + Culture gallery in South Lake Union features paintings, drawings and sculptures by David Hockney, Frank Stella, Agnes Martin, Mark Rothko, Robert Delaunay,  Guillermo Kuitca, Mark Rothko, Wassily Kandinsky, and Jasper Johns, to name a few.
The gallery is in the Allen Institute Building,
Now on view through July 23, 2017

A previous exhibit at PIVOT:  A New Gallery at the Allen Institute for Brain Science
Image

This exhibition is a series of panels that depict the mass movement of African Americans from the rural South to the urban North during and after World War I.

In 1941, Jacob Lawrence, only 23 at the time, spent months working on the subject, writing captions and sketching preliminary drawings. After that, he painted the 60 panels all at once.

This amazing work looks like a beautiful graphic novel telling us an important part of African American history in primary colors and modern art.

From the Philips Collection: “The series was the subject of a solo show at the Downtown Gallery in Manhattan in 1941, making Lawrence the first black artist represented by a New York gallery. Interest in the series was intense. Ultimately, The Phillips Collection and New York’s Museum of Modern Art agreed to divide it, with the Phillips buying the odd-numbered paintings.”

These 60 panels are shown together for the first time in 2 decades on the West Coast.

If you have not seen it yet, run to the exhibit because it is on view only through April 23rd.

If you want to learn more about the migration series and Jacob Lawrence follow this link: Lawrence Migration Series

Image
This exhibition features Chuck Close’s photographic work. Chuck Close is renowned for his highly inventive techniques of painting the human face, and is best known for his large-scale, photo-based portrait paintings. He has mostly photographed friends and relatives but you can also see some nudes, flowers, and celebrities. But what I found more interesting is how he has used photographs as tools or first step to create paintings, prints, and also tapestry. This exhibitions also shows how photography has always played a fundamental role in his art.
If you like Chuck Close’s artwork, you may also have heard that in NEW YORK, the new Second Avenue Subway Line (an extension of the Q line on Upper West Side) has opened on New Year’s day and 12 works of Chuck Close adorn the brand new 86th Street station’s walls.
If you are interested, here are two New York Times Articles on this subject: Art Underground: A First Look at the Second Avenue Subway  and Second Avenue Subway opening 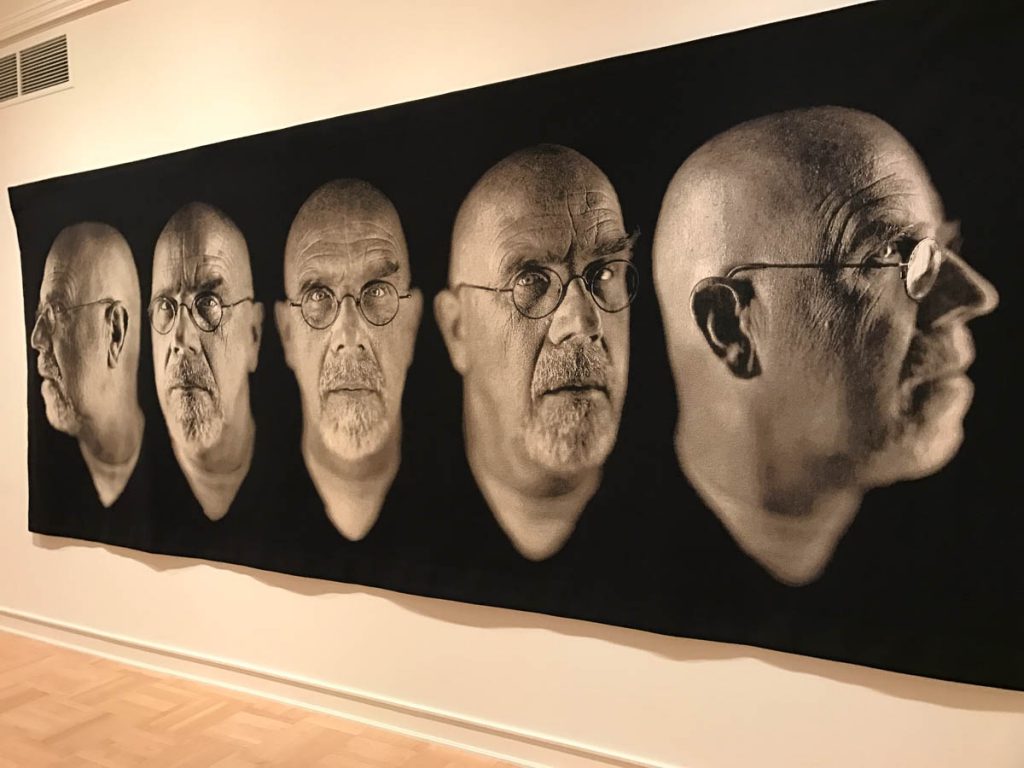